We regret that no visitors or parents are allowed onsite at present so to contact us, please email school@hornsbyhouse.org.uk

View our virtual tour at the Admissions Visit Us page.

Typically the Year 6 play would be a live production, but COVID-19 necessitated a change from the usual format.  Never one to be deterred by a challenge, Mrs. Mansfield responded with an exciting solution.  It involved shooting the production in segments using a green screen backdrop. 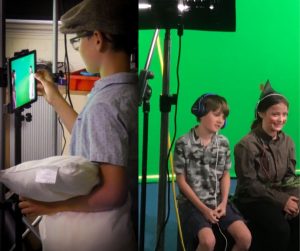 Year 6 pupils during the making of their film, Pantastic!

The clips were edited together to create the film as a whole.

The music and drama department collaborated to oversee the production, but it was the pupils themselves who took on most of the key roles:

“The Year 6 children became actors, directors, sound engineers, designers and editors to create the film version of Pantastic- it is all their work and they did an incredible job!”

Pantastic received its premiere in school on Friday. For the event, pupils arrived in style to a red carpet welcome, complete with an official photocall and applause from the Year 6 form teachers. The pupils were thrilled to have such an exciting format for the debut screening of their production:

“Today was a wonderful day.  We had our photos taken when we arrived at school and walked on a red carpet while the teachers clapped, then we watched the film – it was so good.

It was such a fun experience!” 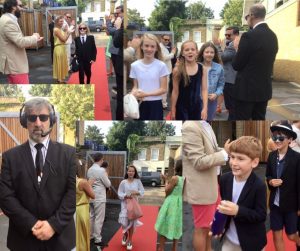 Year 6 pupils arrive to a red carpet welcome on the morning of their film premiere.

As the impact of COVID-19 is felt all around the world, now more than ever we remember our Hornsby House Core Values #whywelovehornsby #COVID #COVID19 https://t.co/7u44uqfbC9

Back to all news

Get in touch for further information

Keep up to date with what’s happening